My association with Ebbsfleet United Football Club, aka the Fleet, began in February 2008 and I started writing in the matchday programme two years later when I took on the role of Fleet Lounge Manager, the sponsors and members hospitality area.

I was responsible for writing a page or two, depending on available space, which covered that particular match’s sponsors, their guests and any news items that would be of interest that weren’t included elsewhere in the programme. This covered 23 home league games, plus any that Fleet hosted in cup competitions.

This wasn’t my first experience of writing regularly in matchday programmes. Between 1993 and 2000, when I was living on the Wirral, I watched Tranmere Rovers FC and after writing and editing the fanzine 3 Men In A Boat I was asked by the wonderful Peter Bishop, then programme editor, to write a slightly off-beat – some would say wacky! – column for each game. 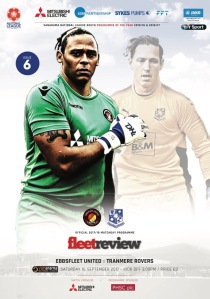 I mentioned this at the Fleet and throughout the 2011/12 season I anonymously penned Thoughts of a Silhouette. Some of the references and ‘humour’ are, of course, dated now, but here is the Silhouette from that season’s Barrow game. In September 2015 I was asked to reprise the Silhouette for the game against Sutton United.

My role at the Fleet finished in 2013 when KEH Sports Ltd. purchased the club, but I continue to contribute to the matchday programme. In addition I occasionally provide live match coverage on Ebbsfleet’s official twitter feed, which is exciting and exhausting in equal measure. Knowing that hundreds of Fleet fans who couldn’t make the match are hanging on your every tweet certainly gets the adrenaline pumping!

“For the best part of a decade, Phil has written articles and suggested plenty of ideas for the Ebbsfleet United matchday magazine, often at short notice, but always delivered in a timely and accurate manner. His contributions, be they humourous or on more serious topics, are always conveyed in just the right tone and prove consistently popular with our supporters.”
Ed Miller
Ebbsfleet United FC Communications Manager

In the 2017/18 season, when Tranmere played at Ebbsfleet in September, I wrote an article in the third person in which I ‘interviewed myself’ about what it was like for both my teams to meet in a competitive fixture, which was great fun to write.

Subsequently, during the summer heatwave of 2018, I was asked to look into my crystal ball and write a tongue-in-cheek ‘The Season Ahead’ article for the opening game of the 2018/19 season, for which I was also the PA announcer (!), and during the pandemic-curtailed 2020/21 season, I penned a reflective piece covering Covid-19 and the effects on football and society for the behind-closed-doors game against Tonbridge Angels.